Raise Your Glasses: Fancy Some Mimosa?

Are you getting ready for the International Women's Day?

When I was growing up, posters like this one were all over Moscow on March 8th: 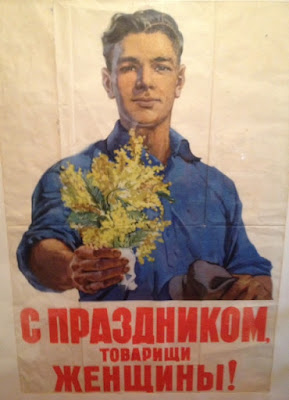 I personally have no problem with this guy. A nice hardworking young man with an open face, a subtle smile and a bunch of flowers. Not my favorite flowers, but I wouldn't go so far as to call them "revolting, disturbing yellow flowers" (Mikhail Bulgakov, "The Master and Margarita") .

"God knows what they're called," he writes, "but for some reason they're the first to appear in Moscow."

Well, in Russia they're called Mimosa, and they're traditional for the International Women's Day celebration.

Mimosa is one of the common names for Acacia dealbata. This species of Acacia is native to Australia and has been naturalized, among other areas, in Sochi located on the Black Sea coast of Russia.

Acacia dealbata is also known as Silver Wattle or Blue Wattle, but to me it's always been Mimosa, so Mimosa it is.

No Mimosa? No problem.
How about a mixed drink of champagne and orange juice?
Go ahead, have a mimosa. Or two.


Live for the Love of it,
Sasha A. Palmer (aka Happy)