"The Adventures of Elektronik" and "The Winged Swings"

“The Adventures of Elektronik” was released the year I started school.  I think I became interested in the movie when I grew a bit older.  Whenever it happened, I fell hard.  They say it’s a ‘cult film.’  I’m not fond of this word – “cult” – but I guess, that’s what it really was.  A “Harry Potter” of my time.  No summer was complete without “Elektronik” shown on TV.  We acted the movie out.  We sang songs from it.  We all had our favorite characters.

There are some “bad guys” in the movie, but they are bad in a funny way, they are not scary bad (the horrific computerized images of evil had not been invented yet,) and you know for sure they cannot win.  It’s a sprinkled with magic happy tale about childhood, friendship, and growing up to be a good person.

I like “Harry Potter,” but I miss “Elektronik.”  Maybe, I’m partial, because I’m nostalgic.  There must be something more to it though, because my young daughter - a huge “Harry Potter” fan – loves “Elektronik”, too.  I’m glad she does. :-)

Here’s one of the songs from the movie.  It's called "The Winged Swings."  Music by Yevgenij Krylatov.  I’ve translated the lyrics.  (The original lyrics are by Yurij Entin.)  Performed by Elena Shuenkova, a chorister of the Bolshoi Theater Children’s Choir.  Enjoy!


Spring has come, the snow is melting,
Days are long, the sky is bright,
And the old swings are waiting,
They are ready to take flight. 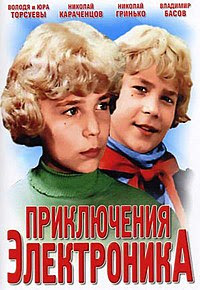 Childhood years are not forever,
We get taller every day,
Friends can’t always stay together,
Some will fly so far away,