Hi,
I love "meat and potatoes." In any shape or form. One of the things I started making recently during my "quarantine cooking" phase is this dish:


It's essentially a rolled-up casserole. And it's really yummy. Not too difficult to make, doesn't take long, looks kind of festive. Worth a try!

Preheat the oven to 350° F (180° C) while prepping potatoes. You'll need about six or so. Peel them and slice them thin. You should be able to bend a slice without snapping it -- that's a good benchmark for thinness.

Line a baking tray with parchment paper (I lightly grease the paper) and evenly sprinkle shredded Parmesan cheese over it leaving a bit of a margin on each side. Don't go light on the cheese. You'll need about 2 cups to make a nice layer.

Next, place the potato slices on top of the cheese. Make sure the potatoes are overlapping. They should look like fish scales (see the pic below.) Sprinkle more Parmesan on them, season with salt to taste and bake for about 30 min while working on the cheesy meat filling.

After 30 min or so of baking, the potatoes should be golden and slightly crispy (see the pic below.) Take them out of the oven and set aside to cool. 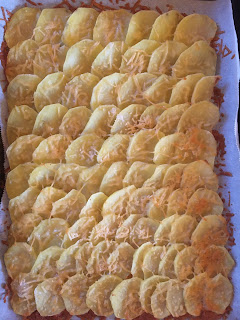 While the potatoes are baking cook the meat.You'll need about 1 pound (around 500 g.) I've been using ground beef. I like to cook a medium-sized diced onion until translucent, then mix in the meat breaking up the big chunks until the meat is browned nicely.

Next, add diced and drained tomatoes (a 14 oz can (about 400 g) or fresh) and seasoning. Salt, pepper, paprika, Italian seasoning, fresh parsley -- you pick! Continue cooking until the meat is done. I let the meat mixture drain while I move on to ricotta.

You can use ricotta alone or you can add spinach to it. A lot of spinach goes a short way and it cooks fast! Season spinach lightly with salt, add garlic (optional) to taste, and cook with a bit of oil. When spinach just begins to wilt, it's done. Mix it with about a cup of ricotta in a bowl. 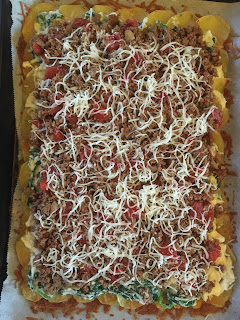 Now to the fun part: holding the parchment paper, gently pick up the bottom end of the potato sheet and begin rolling upward. The parchment paper helps with rolling, so you don't have to touch (and possibly break) the potatoes. Continue until you have a potato roll.

Place it on top of the same parchment paper and bake it for about 30 min until golden brown.

Live for the Love of it,

Sasha A. Palmer (aka Happy)