hope all's well with you.


June is drawing to a close. Hard to believe, but true. Should we talk the fleeting time? 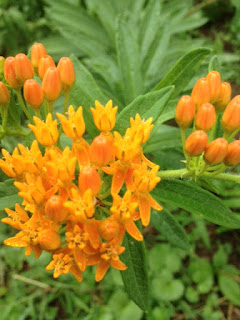 I want to honor my special friends today. My three loyal companions on the wikems journey. It would have been pretty lonely without you.

Thank you for sharing a bit of the fourth dimension with me.

"Time is often referred to as the fourth dimension." (Wikipedia)

I'm putting wikems on hold for the time being.

We are half way through the year. If you've been with me since prompt one, you've written a chapbook's worth of wiki poems!

I'm not going anywhere, though. Thank you again for being here, in this cyberspace.

P.P.S. Green thumbs, could you tell me the name of the flower in the pic I posted, please? (Something I have in my garden, don't know what it is.)
Posted by Sasha A. Palmer at 8:10 AM